I’m not a “cruiser” guy. My motorcycle self-image had more to do with full leathers rather than a leather vest and chaps. More about Moto Guzzi and less about Harley Davidson. However, although my eyes might have been on a Ducati budget, my wallet was more aligned with a Vespa. So after I had my epiphany of speed at Laguna Seca (see previous installment), I needed something bigger and badder but still within budget. I fell onto a target of opportunity in the form of my brother-in-law Ron’s Suzuki GS750LX.

The timing couldn’t have been better, plus he offered a safe buying experience and easy payment plan! What more could I want? But the LX?! This was Suzuki’s cruiser model and all I could be thankful for was that the Japanese didn’t try too hard to emulate a Harley back then, so all I had to deal with were pullback handlebars, a two-step seat and the giggles of all of the guys on The Sunday Morning Ride pointed in my direction.

A few things that were nice about this Suzuki cruiser was that it had a very low seat height. My 28.5″ inseam usually precluded being able to put feet flat on the ground, but on the Suzi, it was no problem. The pull-back handlebars forced a sit-upright riding position which is both good and bad. Without any kind of fairing, the wind blast is substantial and it put a lot of strain on your arms. But for short, low-speed trips around town, it was quite civilized. Out on the open road, however, that upright posture was murder on my butt and spine. So clearly I needed to do something about this to make this bike my own.

The first mod I undertook was to change my riding posture. I did this in the most cost effective but probably least ergonomic way: I bought new flat drag bars and a bolt-on mini fairing. Hindsight and experience tells me that doing this without making any modification to the foot pegs or brake/shift controls was probably folly, but I’ve found that an empty wallet overcomes ergonomic needs every time. In point of fact, the riding position wasn’t that bad, and on long freeway jaunts, I would just put my feet on the passenger pegs to give my knees a rest.

Little did I know that I had stumbled into an incredibly sweet deal. I was looking for a bike with more power that didn’t cost me a fortune and what I got was a 16-valve, double overhead cam, inline four superbike that was all dressed up in country duds. The GS750 was bigger, faster, and more powerful than the Kawasaki GPZ550s I had just ridden at Laguna Seca. Humm-baby, this was going to be fun! 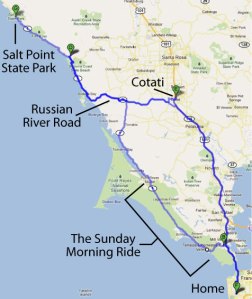 It’s safe to say that that bike and I became one. Wherever I went, it took me there. Whether that be the 54 miles roundtrip to work every day, or the frequent 200 miles weekend trips around California’s Northern coastline. The twistier the better, just as long as I could ride my Suzi.

One of my favorite things to do was to participate in The Sunday Morning Ride. This is a legendary ride from Tam Junction in Mill Valley, California up Highway One to Stinson Beach. It’s been going on since the ’50s and is still a staple for adrenaline junkies from all around the San Francisco Bay Area.

However, my skill level was not on par with the leaders of that pack, so I would incorporate The Sunday Morning Ride within a full day of other merriment. I would leave 15 minutes before the main riders and then stop a few miles before the breakfast stop at the end. I would pull out my trusty Nikon and take photos of them hanging butts and dragging knees. I would then not stop for breakfast, but continue on another 75 miles up the coast to Salt Point State Park, where my best friend would be conducting a skin diving class and abalone cookout for the dive store where we both worked. He would bring my wetsuit and other gear for me and we would free dive for those underwater delicacies and then clean and cook them for the class.

I would then leave about an hour before dark and go back down Highway One but this time turn inland on Russian River Road, a beautiful ride although tremendously “buggy” right at dusk. My sister owned a restaurant in Cotati, so I would stop there after the 50 mile ride from Salt Point. After a scrumptious dinner, I would drudge home the remaining 50 miles and fall into bed completely exhausted.

I did that 200+ mile trek fourteen times one year (one of the advantages of living in mild-weathered California) and I still can’t believe I used to pack that much fun into one long day. Through the years, I became expert in surviving The Sunday Morning Ride as well as a busy rush hour commute. Those were the days. Over ten years in fact. But as with every life, change is inevitable, and I happily spent the next twenty years concentrating more on putting baby seats in SUVs instead of dragging knees. But a time come in every man’s life where he wants to revisit the things that bring him joy, and motorcycling is one of those for me. As I start this new journey and love affair with “Connie” it always is good to remember the ones who helped you along the way. For me, that’s my trusty Honda CL350 Scrambler, Keith Code’s fleet of GPZ550s, my Suzi GS750LX…but most of all wife Joan for putting up with me all along the way. To my three wonderful kids, be sure to marry well. I did.

Here’s part four of the story.