[ Continued from Part One ]

BigRed back in his ab diving prime — circa 1982

It had been 25 years since I last dove for abs at Salt Point. Back then, it wasn’t a casual pastime, it was a major passion. Tom and I both worked for the same dive store and we took all of our classes to Salt Point for their first ocean dive. I had been ab diving at least a hundred times over the years and had achieved the ultimate badge of ab-diving honor: being an “Ace.” Becoming an “Ace” means that you could get your limit of abalone—it was four back then—on one dive. And in Northern California, than means on one breath because no SCUBA is allowed for Ab diving north of Point Conception. In truth, I was in much better shape back then, and last time I remember “Ace-ing” it was flat calm with great visibility and bright sunshine…in other words, perfect.

This trip was just about the exact opposite. Oh, the water was pretty calm. But the visibility was the worse I had ever seen. You literally could not see your fins if you looked down. There was a strange kind of particulate in the water that made Ab diving almost impossible. So much so, that I remembered the hard way to keep my arms in front of my face when diving into low visibility water.

Yup, I found the rocky bottom with my head first. But the worst part was how dark it was just ten feet below the surface. It was pitch black, like a night dive. Due to the heavy particulate, no doubt. So even if you successfully made it to the bottom where the Abs were, you had to stay there for a good 30 seconds to let your pupils dilate enough to see anything. I wish I had a flashlight with me, it would have helped a lot. Suffice it to say that even though I have “Aced” this day I was “skunked.” But I didn’t care. I wanted to know if I could still Ab dive, and everything went just fine (except for finding any of the elusive critters on this particularly low visibility day).

After a scrumptious abalone lunch (my best friend Tom wasn’t skunked!) we lounged on the bluffs until it was time to head home. We repacked the dive gear in MyConnie’s saddlebags, traversed the harrowing dirt and gravel road, and headed back down Highway One.

On sand, it’s fine. On a curve…trouble!

Not a mile outside of the park, we came across one of those incredibly deep turns that are common on the Sonoma Coast where the road makes a big hairpin curve inland ringing a deep cove inlet. At the apex of the first hairpin south of Salt Point, there was a long blade of slippery kelp right in the middle of the road! If you’ve never tried to walk across a rocky Northern California “beach” then you don’t know what slippery means. And slipperiest of all are rocks that have kelp (seaweed) on them. I swear it is slipperier than ice, and when placed in the apex of a hairpin turn, it can be quite exciting indeed. Luckily, MyConnie and Bonnie avoided the first instance of this banana-peel-o’-the-sea but we came across a few more. It wasn’t long before we found the culprit: a pickup with a kayak on top that was shedding kelp. We passed the offender and decided to eschew River Road and continue down the coast when presented the opportunity.

We took the Bodega Bay road inland towards Highway 101 and were subjected to almost uncomfortable heat which enjoying the rolling west Marin countryside. The heat was made more tolerable once we reached Highway 101 and were traveling at freeway speeds. But it turned out that the heat, and speed, would be short-lived. Once we started climbing Waldo Grade on our approach to the Golden Gate Bridge, we were once more “treated” to 50-degree blowing fog, but this time it was more like light rain accompanied by bumper-to-bumper traffic. The San Francisco Bay Area is famous for its micro-climates and today was a perfect example of that. To go from a full sweat to bone chilling cold with only 30 miles and minutes in between is definitely an experience.

One parting shot before the end of our Abalone adventure was initiated with Rich pointing wildly at MyConnie and trying to tell me something. At the next light he said, “Your fins are gone!” I was momentarily crestfallen. I’ve owned my treasured duckfeet since the 1970’s and there are irreplaceable. At the next stop light Rich flipped up his helmet and told me he saw them fall of a few blocks back. I can only imagine what was going on in the minds of the drivers who saw a man in a blue Icon motorcycling jacket walking into traffic with hands raised in a gesture for them to stop—helmet in hand—to pick up his odd-looking, brown swim fins that were laying in the roadway. Yet in the context of all other oddities available for view in San Francisco, this was just another one added to the mix.

What started out as a lively jaunt to combine two passions—motorcycling and ab diving—ended up being a significant test of endurance. Most importantly, this attempt to recapture some favorite activities of my youth proved to me that I still have the endurance and skill to pursue these passions, and more importantly, that they were every bit as much fun as I remember. This day left me energized for my next motorcycling adventure and looking forward to the next time I could stalk the wily abalone.

Epilogue: Interestingly, the terrible visibility I encountered turned out to be an ecological anomaly called a “red tide.” This explosive bloom of toxic algae ended up killing hundreds of abalone and resulted in the state of California closing down abalone season for the rest of the year. So much for retrying my luck later this fall. I’ll just have to plan a trip next Spring when the season opens up again. Maybe this time I’ll invite all of my motorcycle buddies to come along for the ride. 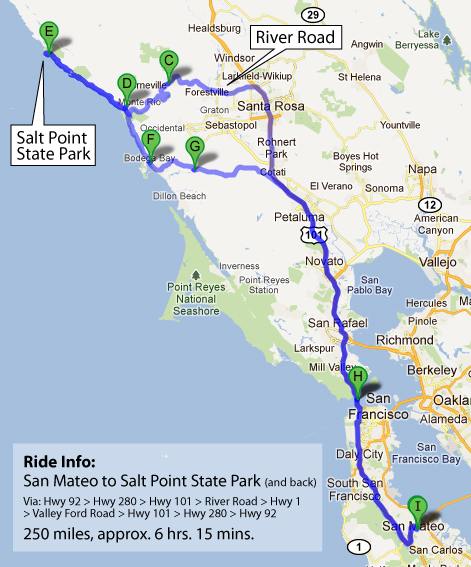 3 thoughts on “Me and MyConnie: Abalone or Bust! – Part Two”