Starting Out
How’s this for a great Father’s Day weekend: Load up “MyConnie” with camera and camping gear, point the front wheel north, and GO! Just me and MyConnie getting some quality time together since the wife and youngest son are away for a few days. I plan to update this post throughout the trip, so come back often to check it out.

Rest Stop
Thank God for Starbucks and lane splitting. Sitting still in 88 degree weather on the freeway is not my idea of a good time. Seems like everyone else in the world is escaping to Lake Tahoe. Well, at least a rider can get hydration, caffeine, a healthy snack and WiFi thanks to the Pequod’s chief mate.

Cooling Off
Possibly the best $29 I have ever spent was on an evaporative cooling vest. After a two minute soak in the bathroom sink at Starbucks (which was immaculately clean) the vest is “charged” with water. You then blot off the inside fabric barrier that stays dry against your shirt, and put it on under your riding jacket. I was then able to ride in complete comfort in 90 degree heat. Amazing.

Dark Territory
After stocking up on pita, avocado, bananas, water and a salad bowl at the Grass Valley Safeway, I headed north on Hwy 49 towards Downieville. This road is listed in the Destination Highways moto-map book as DH9 and carries a score of 81/100, and it deserves it. It is wonderfully scenic, twisty and empty of traffic. Downieville itself looked very cute, like a preserved gold rush era town. I decided to camp instead of finding a room, but on some future trip, I’m definitely going to stay in Downieville.

I timed my ride so that I could set up camp while it was still light, but only just. I use a great iPhone App named “Sol” that tells you times for sunset, dusk, dawn and sunrise wherever you are. This allowed me to keep riding until I found Chapman Meadows campground around 8:00 P.M.

Getting old is terrible. I remember when hotel rooms were $6.00 at Motel 6, so it makes it painful to pay $21 for one night at an unimproved campground. Well, at least it had “nice” pit toilets. The mosquitoes quickly drove me into my tent where I fell fast asleep straightaway.

Zero Dark Thirty
The great thing about traveling alone is that you don’t need to cater to anyone else’s schedule. So, at 4:45 A.M., I rousted myself out of my down cocoon, performed my morning ablutions, and started breaking camp. I got on the road a little before six and headed over the Yuba Summit to be treated to a gorgeous sunrise over the Sierra Valley. I left Hwy 49 a little before Sattley and turned north on Hwy 89, headed towards Quincy and Lassen Volcanic National Park beyond. Although I was bundled up in layers, winter gloves, and TurtleFur neck warmer, I was freezing when I arrived at the Express Coffee Shop. Nothing that a spinach omelet and 10 cups of coffee couldn’t cure. Something tells me MyConnie is going to get a few more RPMs now that MY motor is running. 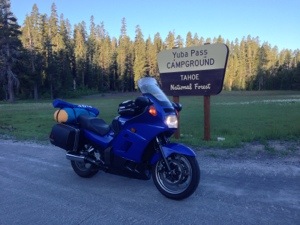 The Pine Forests
Can you ever overdose on the beautiful conifer forests of the High Sierra? I think not, but you certainly get your fill traveling through the Tahoe and Plumas National Forests. But every once in a while, the trees are interrupted by a glorious body of water like Lake Almanor. I crossed over Canyon Dam and marveled at this man-made interruption to the Feather River. The outlet tower shown behind MyConnie sends the product of this 90 foot deep reservoir to two smaller reservoirs and others downstream to powerhouses capable of creating a total of 360 megawatts of electricity!

Mount Lassen
I had been to Mount Lassen Volcanic National Park years ago but wanted to experience it’s burbling mudpots and sulphur-spewing springs anew. So I checked my trusty map book and found that the roads to, through, and around Lassen are included in their lists of great motorcycle roads. Without any hesitation I pointed MyConnie north along the Volcanic Legacy Scenic Byway.

One of the troubles of blogging “live” from my AT&T iPhone is how poor their rural mobile phone service is. However, after paying my $10 park entrance fee, I noticed this sign and for a fleeting moment hoped that the U.S. Park Service had embraced modern technology by installing WiFi thorough the park. Alas, it was the icon for an amphitheater I mistook for WiFi symbol. D’Oh! 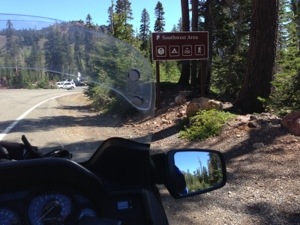 The Kohm Yah-mah-nee Visitor Center shows a great 20 minute documentary film every half hour that explains the history and formation of the park which is the only place on earth with all four types of volcanos.

A mile north is The Sulphur Works where you can smell noxious fumes and see bubbling mud.

After that, it seemed that every quarter mile were increasingly beautiful places that beckoned me to stop and take a photo. 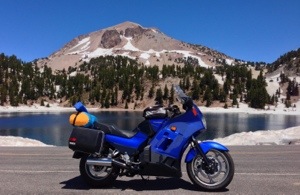 Unfortunately, the walking trails to “Bumpass Hell” which take you right next to all of the bubbling water and mudpots were closed due to safety concerns. But the ride up and over the ridge at around 8,500 feet elevation was spectacular as was the ride down and around to the north end of the park.

The Road Home
At this point, I had enough of solitude and decided to head home. I took a few more “Destination Highways” that were perfect for motorcycles on the way, but most was spent traveling 75 MPH on Hwy 5 in 90 degree heat. Once again, thank God for my evaporative cooling vest and the many rest stops and convenience marts along the way. 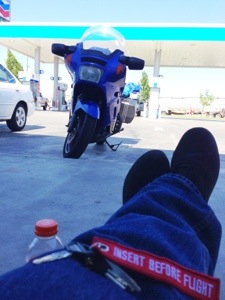 As for this trip, I racked up 671 miles from noon Friday to 6:30 P.M. Saturday, a bit over 30 hours. Not bad for my first Father’s Day weekend solo trip. It’s not often I get so much “me” time to think about life without the distractions of other people (no matter how pleasant) or social media (no matter how addictive – then again, I am writing this post!). I might just have to make this an annual pilgrimage.

Note to fellow bloggers and those thinking about blogging: I took all of the photos above and wrote all of the text during the trip itself using the WordPress App for iPhone. This made ‘capturing the moment‘ much more spontaneous and added to my enjoyment of the ride. I went back later on my computer and added the sections below.

Ride Map: Click here for Google map
( Note to riders: map waypoints M through R are how to beat backed up traffic headed to San Francisco like a boss! )

Ride Report:
– Date: February 14 & 15, 2013
– Roads: Since this trip covered so much territory, I encountered: 20 miles of lane splitting to get around everyone headed for Tahoe, wonderfully engineered and paved roads, nicely paved but less well-engineered roads, and tight curves with limited sight lines on the roads between Shingletown and Dales.
– Scenery: What can I say, I have been living in California my whole life and I am still awestruck in seeing its majesty. If you are from some other state, COME HERE AND RIDE!
– Weather: The weather was absolutely perfect on this Father’s Day weekend, albeit a little warm at times (high 80s) at the lower elevations. The sky was a sapphire blue with those intense puffy white clouds you want to photograph because they are so perfect.
– Challenge: Intermediate throughout with the biggest challenge being not getting run over my a semi-truck on Hwy 5.
– Food: Plenty of choices along this route. I stopped at Safeway in Grass Valley and stocked up on healthy food and snacks this time – what a concept!
– Gas: There were no problems finding gas, but then again, with my 7.5 gallon tank, I could have done the whole thing on way less than three tanks.
– Rating: 5-stars (out of 5) for scenic beauty. with a few most excellent motorcycle roads thrown in along the way.

Note: I bought the Destination Highways of Northern California book at the last International Motorcycle Show I attended. It is pretty expensive at $60, but I have to say that it is absolutely worth it. I use it to plan all of my northern california trips to ensure I get the most out of my time on the road. Although it is pricey for a map book, they actually put in the time and effort to bring the value to the rider than exceeds your expectation. Highly recommended for anyone wanting to ride in northern california. 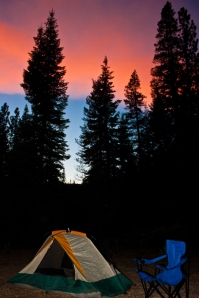 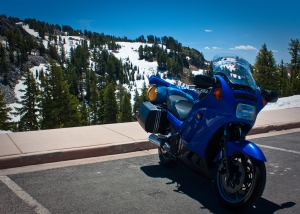 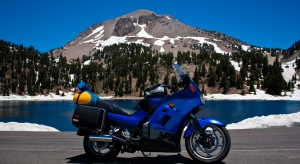 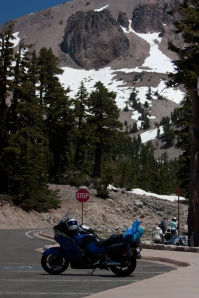 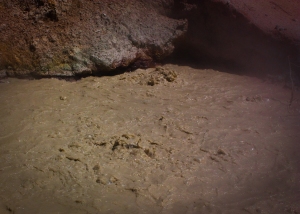 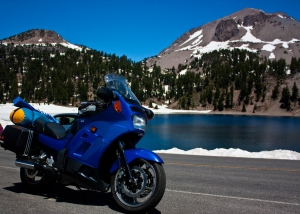 Get the free iPad eBook: