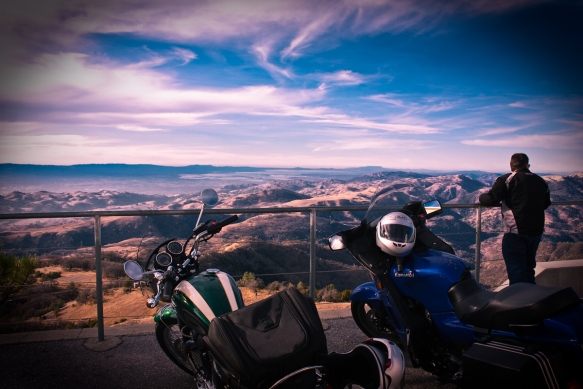 Towering above Silicon Valley, majestic Mount Hamilton is a place I had never visited even though I’ve lived in the San Francisco Bay Area all my life. The tallest of three mountains that rim the bay, at 4,196 feet Mount Hamilton bests Mount Diablo at 3,864 and Mount Tamalpais at 2,574 (see earlier post) feet elevation. With the weather being unseasonably warm and dry on December 31, my brother-in-law and riding buddy, “Bocci” and I decided to get one more ride in before the end of 2011.

We both live in San Mateo and saw on Google Maps that this ride was only 60 miles one-way. “No problem!” I said, worrying about being home before dark, “It should take us no time at all to get there and back.” Little did I know that we would encounter some of the longest sections of twisties in the Bay Area riding up to the summit.

We took the slightly longer, but much more scenic I-280 freeway around the bottom of the bay to where it morphs into I-680 and then exited on Alum Rock Avenue. Only a few miles up the road was the turn for Highway 130, the road to Mount Hamilton. The road was similar to those in many California foothills with a few tight turns interspersed with longer sweeping curves in between. What is deceiving about this ride is that you first need to go up and over a first set of mountains before having a fairly long stretch of road prior to climbing up to Mount Hamilton peak.

This first set of mountains provides some incredible views of the East Bay, but there aren’t any vista point pull-offs to make it easy to stop and take photos. Much of the road lacks guard rails and there are precipitous cliffs at the road’s edge, so this is a good road to practice caution and have your speed under control. Last year, I came partway up this road and nearly ran into a flock of turkeys! What is it with turkeys and motorcycles? This makes three times I’ve nearly hit the stupid birds wandering across well-traveled highways! A full grown coyote also deftly crossed the road well ahead of our bikes as we came down the mountain. Suffice it to say that this is a “heads up” ride more suited to intermediate and above riders rather than novices.

The first set of mountains gave way to the beautiful and intriguing Joseph D. Grant County Park and Halls Valley Lake, known for its bass, catfish and crappie fishing. This enticed me to do further exploring on another day, but Bocci and I kept our goal in mind and pressed onwards towards Mount Hamilton. We traveled onward and worried that we might have missed the turnoff, but then noticed the prominent observatory buildings on the mountain peak far above beckoning us to continue. 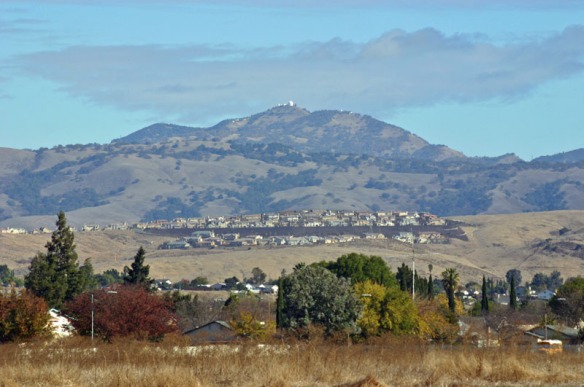 Having our goal in sight didn’t mean it was close by. We traveled another fifteen minutes and only then found the Mount Hamilton turnoff sign which noted it was still seven twisty steep miles before reaching the summit. We came across many ambitious bicyclists along the road and were passed by a number of lightweight dirt bike riders festooned with helmet cams. Eventually, we arrived at the summit and went alongside the observatory building to its parking lot and were not disappointed by this the most spectacular view of the Bay Area. 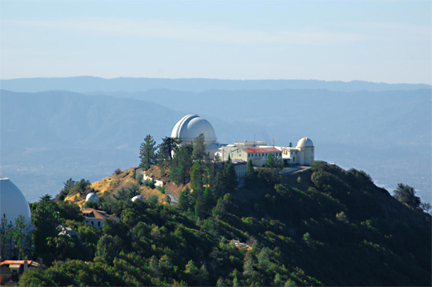 The view from Mount Hamilton

Above is a panorama I shot and stitched together to give just a partial view from the summit. We were surprised to see another panorama in a photo inside the observatory that showed Yosemite’s Half Dome as seen from Mount Hamilton! Since Yosemite is a four-hour drive away, you don’t imagine that this elegant dome could be seen from your own Bay Area backyard, but it can! Here is a photo I clipped from the web showing California’s most famous peak. 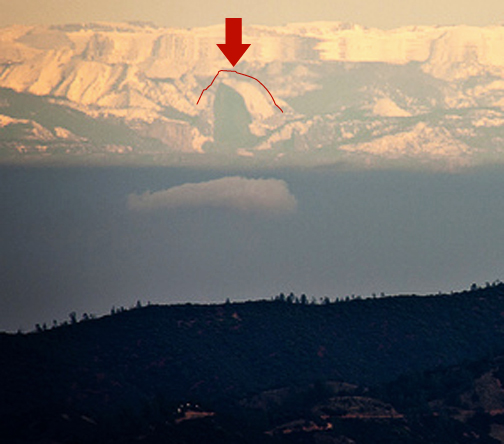 Half Dome as seen from Mount Hamilton

More amazing facts were found inside the Lick Observatory, such as…
– The Lick Observatory was built in 1887
– It was the first permanently occupied mountain-top observatory in the world
– In 1939, because of a nighttime fog that engulfed the summit, an Air Force A-17 attack plane crashed into the main building (only the 2 pilots were killed)
Suffice it to say that you could spend a lot of time visiting and enjoying the Observatory. We didn’t see that the telescopes were available to visit, and we didn’t have time to ask to see if that would be possible at all. On my next visit, I’m going to find out ahead of time whether it is possible to visit at night and participate in a star gazing event. What a wonderful gem to have hidden in plain view of where we live and work! Here is a photo taken in the direction of Mount Hamilton from my office in Sunnyvale March 2006 with the snow level falling down to 2,000 feet!

Coming down off the mountain, a bicyclist drafted behind Bocci the whole way! I actually felt pressured to speed up because he wasn’t 20 feet behind my brother-in-law’s Triumph Bonneville and no matter what we did, we couldn’t shake him until arriving on flat ground. It was amazing that he could keep up and not slide out in the many curves that had handfuls of gravel in them. I would label him an idiot if he didn’t show such nerve and skill.

My final comments to anyone reading this post is “do this ride!” And go early enough to spend time taking lots of photos and poking around Lick Observatory. If you are really into astronomy, see what public programs are available for nighttime star gazing (if any), but don’t attempt this road at night on a bike. 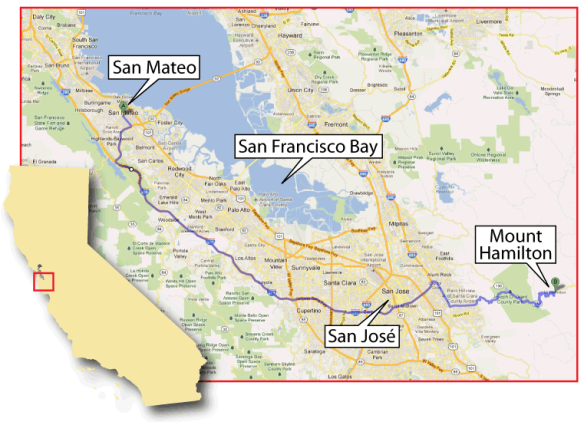 Ride Report:
– Date: December 31, 2011
– Roads: A well paved road with sections of fresh paving, generally smooth with intermittent sections that are not well-cambered
– Scenery: Mountains, canyons, valleys and a unique view of Silicon Valley and the San Francisco Bay Area
– Weather: Perfect for New Year’s Eve: mid-50s on the mountain top, no wind or rain.
– Ride: Tight, steep twisties with precipitous cliffs at road’s edge. Be careful and ride within your limits!
– Challenge: Intermediate to advanced (doable, but not fun for beginners)
– Food: Bring your own for during the ride, but there are vending machines with drinks and snacks at Lick Observatory
– Gas: As this is not far from civilization, gas should not be a problem. But, there is no gas available en route, so make sure your tank is filled
– Rating: 5-stars (out of 5) for overall enjoyment, although the ride itself was challenging and less fun than a romp in the Sierras
– Additional Fun: Inside Lick Observatory is a gift shop and U.S. Post Office. Bring or buy some post cards and drop them in the box so you can delivered them postmarked from atop Mount Hamilton. This is a fun activity that so many people have forgotten to take advantage of.

Half Dome as seen from Mount Hamilton

The view from Mount Hamilton

Get the free iPad eBook: 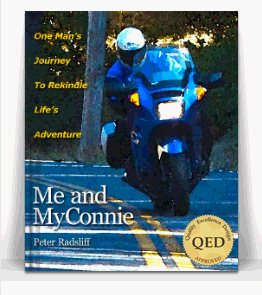